The South East Radio Group supported the local Scouts and for the first time in a very long time the Girl Guides in a combined event. Andrew VK5KET, Tim, VK5AV, and Col, VK5HCF, met at the S.E.R.G. Clubrooms to hide the transmitters and setup the receivers, also known as sniffers. The Scouts and Guides were doing J.O.T.I. at the scout hall and from there they were going to do the fox hunt.

Scouts, Cubs and Guides paired off to find a hidden transmitter. Once found they were to return and get another one to hunt. To make it even more confusing they were not all hunting the same transmitter at the same time. To prove they had found the transmitter they had to report back the numbers.

Some pairs were quicker than others, however once they found the first one, they were all eager and keen to find the next one. Overall 9 pairs were fox hunting for the afternoon. Everyone found at least 2 transmitters.

At the end of the event we were asked into the hall where a senior scout thanked us for putting on the foxhunt. Koala asked the troop if they wanted us to return next year and it was a very loud yes from the kids.

Special thanks to Tim, VK5AV, and Col, VK5HCF, for giving up their afternoon to help put on the activity. 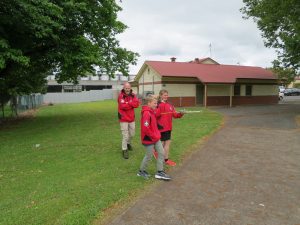