At the 2021 Annual General Meeting President Peter, VK5BE, had great pleasure in awarding the Presidents Trophy to Tom, VK5EE, for his outstanding contribution to the Club by being there for every Sunday morning Broadcast for the year, including also the Friday Night sessions during which he has presented the A.R.R.L. Podcasts.Working in a cramped shack with no heating Tom has been on time for every broadcast and has proved to be as reliable as a Swiss Watch.Well done and a big “Thank you” Tom.

Sunday 6th. December was shaping up as a disaster for a BBQ, with high blustery wind and numerous showers of varying intensity. Not a day for an outdoor gathering for sure.

After finishing off the Sunday morning Broadcast and the Call backs Tom, VK5EE and VK5HCF, set off for Millicent.

Numerous showers were encountered along the way with the occupants of the “Shopping Trolley” questioning their sanity.

On arrival at Lake McIntyre we found a few of the Members already there.

Most notably Chris, VK5MC, and wife Josie to whom we owe a big vote of thanks for arriving early in order to secure the site against marauding tourists.

Also to John, VK5DJ who organised for the area to be roped off with bunting to assist in pointing out to potential interlopers that the site was reserved.

This year we had the site at the top of the hill nearest to the toilets, (but not too near. 😄)

Referring back to my opening statement.

This site proved the above saying by sheltering us from the vast majority of the wind so that we barely noticed it, and we only really had one rain session that caused us to seek shelter for a few minutes. The rest of the afternoon was, in fact, quite pleasant which just proves that sometimes you get lucky.

18 Club Members were in attendance including James, VK3JBM, who came all the way from Horsham in Victoria to join us. Well done James and it was great to catch up again. It was also great to see Trevor, VK5NC, who is temporarily trapped here by the W.A. Border Closure. It was lovely to enjoy your Company for a short time “Niv”

A few of the regulars were missing because of other commitments which was a bit sad but it is very hard to organise these events to include everybody.

The Members who like to engage in a bit of Portable Operating set up their radios and David, VK5HDW’s new Hi-End Fed antenna which covers 6 metres to 40 metres, (I think?).

Unfortunately there was horrific noise on some of the bands and after looking around we suspected that it was coming from a four wheel drive parked on the road opposite our site. The Unit had a solar panel on the roof and we suspect, a refrigerator running inside. Obviously the Solar Panel regulator was a “crook” one as when the 4wd left, so did the noise, but by then the crew had packed up the gear as it was almost time to head home and the bands were almost completely “dead” anyway. “Life was not meant to be easy.”

Glad the 4wd is not our next door neighbour.

As usual the day turned out to be quite pleasant and all who attended enjoyed a few hours of banter and a good feed.

Now we can look forward to next year.

Here’s a link to the Lake McIntyre site. It’s a beautiful spot.

Our secretary Col, VK5HCF, sent James VK3FJBM an email to see how he was getting on in Horsham with all the Covid19 surrounding us all.

Here is his reply.

Thanks for your email! 🙂
Yes, the COVID situation has definitely thrown a spanner in the works this year.I’ve been just treading water with the workload in …………(deleted)………………. as we have transitioned to and from Remote Learning twice now.However, if there is a positive in all this it has been the few extra moments I have gotten to play AR over the past 6 months.
I have invested in a couple of projects.
One has been the purchase a Yaesu 857-D unit, associated Automatic Antenna Tuner and a 10mtr squid pole as a Portable HF setup.Through this setup, I have been able to perform some HF and SSTV contacts.Must say I’m not sure if I will ever enjoy the ‘noise’ of HF compared to 2/70.
The other project has been setting up a Digital Repeater for the Horsham area.I’ve purchased a very nice outdoor cabinet for the project, got power and 4G Internet-connected, programmed up some Repeater Builder boards and a Motorola MTR unit.I’ve worked with City Council and got a contract for me to use an un-used (previously Ambos) tower which has a bunch on antenna’s on it perfect for AR.Through some inspiration from reading VK5DJ’s blog, I have programmed up a temperature sensor on a Raspberry Pi to automatically turn the cabinet’s inbuilt fan kit on/off as required.Hopefully, this will be completed in the next fortnight and I can put together a blog post about it.I have attached a couple of pictures of the cabinet, the repeater is yet to be installed and some cabling to be tidied up yet.
I wish that the restrictions to travel into SA were lifted so I could help out with SERG’s upcoming events, but I’m not sure that is going to happen anytime soon.Even if we have no cases in Regional Vic.
Hope you are also going well and enjoying some sunny days.
Thank You again for the email Col, it made my day!Also thanks to both yourself and other members of SERG for making me feel welcome at events.Without SERG, AR would not be a hobby of mine.
See you soon.
Cheers,James Mutch

It was good of James to fill us in on what he has been up to, and by the sound of it, he has been very busy trying to stimulate activity in the Horsham Area. He is hoping to stand for office at the Horsham Club’s upcoming A.G.M. and, if successful, trying to generate some enthusiasm and activity into their Group. We wish him luck and thank him for the very nice email.

Yesterday President Peter, VK5BE, travelled to Kingston and while there he called in to see Tony, VK5ZAI and Jill.

The purpose of Peter’s visit was to present Tony with a congratulatory card from all of us Club Members on his being invested as a Member of The Order of Australia Medal in The Queens Birthday Honours List for his exceptional contribution to A.R.I.S.S. and N.A.S.A. and for his promotion of the hobby of Amateur Radio to Australia at large.

Attached is a photo showing Tony receiving the card from Peter.

Please have a look at this article from the A.B.C. first.

Once you have read that one open this file.

Jeanne Socrates, (77), is the oldest female to circumnavigate the World solo, (Unassisted).

This event will be a most interesting one and we urge you to tell your friends and buy tickets for this opportunity to follow her adventure and possibly meet her after the presentation. 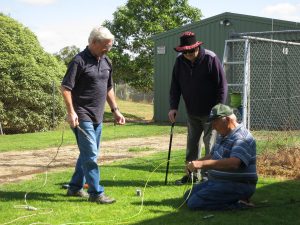 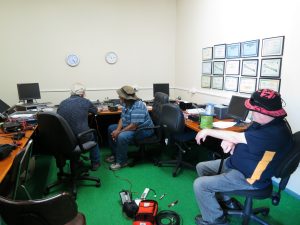 A video of the event can be found here.


Our congratulations to Kevin.
An outstanding effort.
We wish he was still here but appreciate that he would probably not have been able to do this from Mt. Gambier.


Once again we were extremely lucky.

The weather turned out perfectly.

The site was excellent. (Thank you John, VK5DJ)

The company was, as usual, fabulous.

A great time was had by all.

Many thanks to Chris, VK5MC, and the Millicent Rotary Club for providing an extra BBQ and the transporting of it to and from.

A number of our VK3 Members made the effort and travelled quite a distance to join us – namely Ian, VK3DNQ and wife Helen, (Coddrington. Vic), John, VK3FJSN, (Hamilton side of Casterton, Vic.) John, VK3FJET, (Portland).

It was also great to see Millicent Member Gilbert, VK5FGIL, as we rarely catch up with him.

Tom, VK5EE, set up his portable station and a few contacts were made on 40 metres much to the interest of all present.

John, VK3FJET, had a problem with his two metre rig in the car. It appeared to be stone deaf. A number of Club Members had a crack at finding the problem until Tom, VK5EE, suddenly realised that it was the power supply for John’s reversing camera that was obliterating all signals. He unplugged it from the cigarette lighter and the problem disappeared. Well done Tom,

Here are a few pictures from the very enjoyable day.

I have to apologise, as I was supposed to have taken a Group photo but, you guessed it, I forgot. (However, no one reminded me either.)